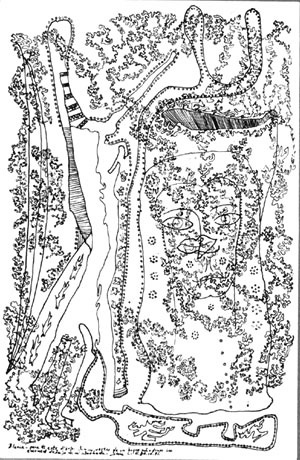 This immanent visitor haunts lilies and the body’s delicate down, he adorns a penumbra.
He roams the chords and the manifold contours, and here, in the window and there, in the magnificent forest,
this wayfarer gazes at me, unreadable,
veils himself in the dense and pungent smell of lamps
and in those intricate weavings oblivion loomed
— the felicitous slips into the periphery
of his marble stare, washed and smooth,
his gaze and grace and flourished baton orchestrate a song for the fossiled stars and from below and above undulate the flux and curve of an undergrowth of
dreams
which our steps flatten without pity to the ground.
A flame hovers over the prattle, ensombers the wine’s sediment, and proclaims the arrival of a corpse to the rituals of morning — light-fearing, the dead one, with ears of gold and cacao,
a torso engraved in his memory,
tears lovely as spiders
and hands alert in their place,
amid the stillness of the psalms.
*
From the blue way you envelop the world,
the blue way you adore it.
I’m saddened and in love with your blue way — with the blue way of presence in
which you attend my readiness to live and die in this world.
With the blue way in which the idea conducts you to gesture’s inception — you sense the great roaring you live, and you interpret and explain it for your kind and for us
at the water’s edge, the ear tuned to the revelations of a lily transmuting light’s desire on a plain of shifting sands, and the measured turns of the wheel foretelling the idea-child and the event’s first and final virtue.
With the blue way in which you gather your thought
— the blue way you cast on that lunar trace, when man surrendered his smile to
the stars.

Born in the Mojave desert, Forrest Gander has written the poetry books ‘core samples from the world’ and ‘eye against eye’ and the novel ‘the trace’.

Finalist and winner Orooj-e-Zafar performs her winning poem, ‘When Your Body Smiles’. She tied with Risham Amjad when the panel of judges that included poet and TMS contributor Ilona Yusuf and the magazine’s Editor-in-Chief, was undecided on who to give the final prize to. Her poem speaks to the importance of being true to who you are and the daily struggle of being comfortable in your own skin.

death at the very touch

"The very touch is the greatest of miracles because the very touch sends two marbles rolling such that they are...