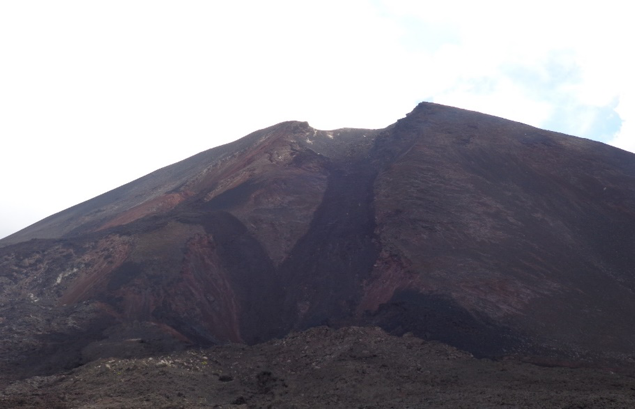 A trip to Central America to explore volcanoes.

Standing just above a steaming crater was quite an exhilarating experience. However, trekking into the valley to get a closer look into the crater or other steaming openings deemed a risky proposition due to the unpredictability of a sudden eruption in such an active volcanic zone.
After experiencing the joy of hiking through several unique national parks throughout various parts of the world over the years, last December my wife and I decided to experience some daring, adventurous hiking. We were especially interested in hiking along the trails of once active, but now dormant (or only occasionally eruptive), volcanoes. Since many of the Central American countries with the Pacific Ocean as their coastline are considered to lay “in a ring of fire”, we decided to look into traveling to some of those countries known to have so-called “volcanic national parks.” Our search directed us specifically to Nicaragua and Guatemala (later on, we added Honduras in our plan to visit some of its famous Mayan ruins). Just before the beginning of last year’s holidays we found ourselves flying to Managua, the capital of Nicaragua, a comparatively small but scenic Central American country, once colonised by the Spanish.

When colonisation ended, Nicaragua saw its share of dictatorial regimes, followed by a recent Sandinista revolution which transformed it into a socialist democratic country. After spending the night in Managua (though the capital of the country, it was devastated by an earthquake in 1972 without much recovery since), we headed towards Granada, the gateway to the Masaya Volcano National Park. Granada, itself is rich in history due to its colonial past, adorned with its famed Catholic Church named Iglesia de La Merced, as well as several cobble-stoned historical neighbourhoods, along with a central market. 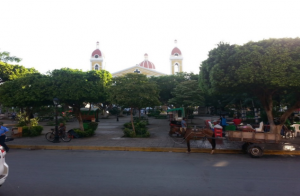 The dome of Iglesia de La Merced in the distance.

The following day, we were driven to the Parque Nacional Volcán Masaya (Masaya Volcano National Park), about 20 km northwest of the city. As we approached the site, taking an exit from the highway, we noticed smoke on the horizon and a strong smell of sulphur. The entire region is known to be the most venting volcano system in Nicaragua.

The paved driving road ended at the top of a mountain range. Warning signs with clear instructions of what actions should be taken in case of a sudden eruption were posted at several points. Various trails snaked around the rim to different observation points. One such path took us to such a point, closer to a still fuming crater on the valley floor. The surrounding area of the crater was decorated with yellow sulphur along with brownish iron oxide that had formed over the years from the interaction of iron-lava with atmospheric oxygen, thus enhancing the appearance of the crater to more of a mysterious black hole.

Standing just above a steaming crater was quite an exhilarating experience. However, trekking into the valley to get a closer look into the crater or other steaming openings deemed a risky proposition due to the unpredictability of a sudden eruption in such an active volcanic zone. So, we spent some more time walking on the trails to different observation points along the rim, soaking up the experience of a violent and exotic sight. 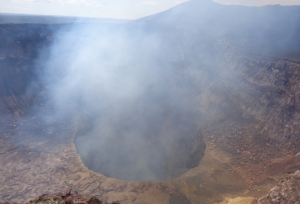 The black hole of a crater.

Our next destination was the Reserva Natural Volcán Mombacho (Mombacho Volcano Natural Reserve), on the other end of Granada. Though, the Mombacho Volcano last erupted several decades ago, it remains active and bellows smoke periodically. Our regular chauffer dropped us at a roadside rest area where we were picked up by a local tour company. Moses, our tour guide, drove us for a while on a winding, steep, paved path to the starting area of the trails.

It turned out that there were three different hiking trails: Crater Trail, Puma Trail, and Ocelot Trail, with varying degrees of distance and difficulty. Due to our time constraint, we decided on the circular loop of Crater Trail that would offer us the opportunity to walk through a misty cloud forest on the Pacific side of Nicaragua while observing the local flora and fauna species. There was a map at the trailhead displaying the direction and nature along the trail. 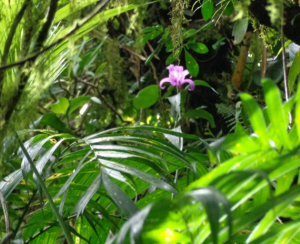 An orchid in the cloud forest.

We began our journey clockwise from the trailhead with Moses as our guide. The trail, though it initially started as a flat hike, soon turned into an up and down mountain alley-way. We were surrounded by lush green vegetation supported by the cloud forest with its condensed water droplets dripping from tall trees where golden sun rays pierced through the leaves. Soon, orchids of various colours came to view. It has been claimed that over one hundred types of orchids bloom in the region.

In addition to the orchids, wild coffee plants with buds glistening in the bright sunlight. 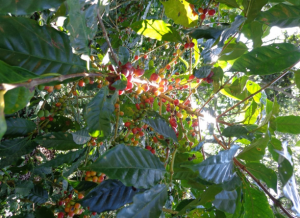 At some point in the hike, we passed through a natural tunnel that was formed due to the splitting of the mountain during a past volcanic eruption. In addition, we heard the loud noise of howler monkeys from tree-tops announcing their territorial authority. Fast-flying colourful humming birds flew past before one could even blink. Moses led us off the path to point out some cracks on the ground where steam was coming out, revealing the active nature of the volcano. The trail ended at an observation point on the mountainside, offering a gorgeous panoramic view. On one side, the dark remnants of past lava flow were visible, while on the other side, a lake under a hazy cloud (a result of the flowing steam from the distant Masaya Volcano) became visible.

We spent a considerable amount of time at the observation site soaking in nature’s serene beauty. Later we returned to the trail and continued in clockwise along the trail for our return journey. However, in this part of the hike, we faced the steepest climb, stepping on narrow stones wet with the condensed, dripping water of a cloud forest. Moses was extremely helpful here, lending his full support to make the trek as safe as possible. 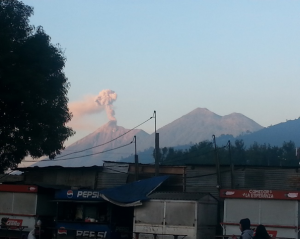 A steaming volcano in the distance.

From Nicaragua, our next destination was Antigua, Guatemala, a getaway to the Pacaya Volcano. The traveling was on road through Honduras (we explored the historic Mayan sites of this country, but that is a story for a different time). Antigua, with its Spanish colonial past, is currently a UNESCO designated world heritage site. The town is surrounded by three volcanoes: Agua, Fuego and Acatenango, respectively. The day we were entering the city, one of them showed some mild activity and was seen bellowing steam. The town has been devastated by these surrounding volcanoes several times, but it has been rebuilt every time, displaying the resiliency of its citizens.

After exploring Antigua for a day, we set out for our hike in the Pacaya volcano, 25km away from Antigua. At the entrance, we hired a local guide named Chobani. As we began, it became clear that it would be a quite strenuous hike due to the steep ascent. After about an hour and a half of rigorous hiking, we arrived near a sea of frozen lava from past eruptions. Due to hints of recent activity, most of the hiking groups that day stopped at this point. Exhausted, I sat on a lava rock facing this sea of frozen lava, which creates a caldera at the top of the mountain. A kind of awe slowly descended upon me taking in this raw beauty, frozen in time.

Interestingly, there was a hot spot near where the hike ended and a few brave souls, expecting such an opportunity, brought along marshmallows to melt over the hidden fire.

Our cautious daring of the volcanoes safely ended here. The next day, we traveled to Guatemala City to catch our flight back home.

Sankar Chatterjee is a PhD-level scientist with a passion for traveling worldwide to immerse himself in new cultures and customs. He aims to discover the forgotten history of the society while attempting to find the common thread that connects humanity as a whole for its continuity. His two most recent essays appeared in Travelmag – The Independent Spirit.

What’s featured in the “Politics” issue including web (and digital) exclusives.