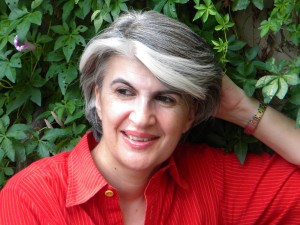 Pakistani English poetry has not received the kind of accolades that Pakistani journalism and fiction have. Perhaps this is because we now live in “an age of prose”, as a speaker at the Islamabad Literature Festival commented. Whatever the reason for this lack of popularity, it isn’t due to a dearth of either quality or talent. Pakistani Poetry in English is Alive and Well, a session at the Islamabad Literature Festival discussed this fading presence of English poetry on the literary scene. One of the panelists during this discussion was Ilona Yusuf. A brilliant poet herself, Ilona was also the co-editor of the Poets from Pakistan edition of the Canadian magazine Vallum.

The Missing Slate’s Features Editor Sana Hussain and Editor-in-Chief Maryam Piracha were fortunate enough to sit down with Ms. Yusuf and discuss a variety of topics including poetry competitions, jalebis (a South Asian sweetmeat), military dictator Gen. Zia-ul-Haq, bilingualism and a lot more.

The Missing Slate | Pakistani poets writing in English are either very few or not very well known. How did you start writing poetry?

Ilona Yusuf | Poetry comes naturally to me; more naturally than prose. I started writing when I was about eight or nine, I think maybe the first poem that I liked of mine was written when I was ten or eleven. I don’t have any of those poems anymore. But then I went on and you know I used to enter for poetry competitions and I won several of them. Most of them were organized by British Council but there was also Punjab University… because this is all in the seventies what I’m talking about, and the seventies were really very vibrant. I didn’t realize this till much later in my life and as I said during the panel, it laid the foundation for a period which came later which was very very barren for me because I really had to contact with people who were writing poetry. So I wrote entirely in my imagination, but again like I said I had access to libraries and that served as a great help.

Young people, when they read and they appreciate the sounds and the music of words, that’s when they improve their writing skills; plus they develop an appreciation of literature. And I think those things also contribute to tolerance in general, which we don’t have.
So that’s how I began writing and it was in the nineties that I had a lucky break. Then I realized how vibrant that period of the seventies was, because I would constantly look back on it and think about it and I remembered the days when I used to collect big volumes of poetry wherever I could find them. Then OUP [Oxford University Press] published the golden jubilee series so I amassed a collection of poetry by Pakistani poets. [Although] it’s not necessarily having a local idiom which matters to me, because I think it mattered to poets more in the fifties, but, you know, your immediate surroundings always come out in your images. So I was looking for something that would give me reference points, but that’s not necessarily something that I would follow. So I tried to read as widely as possible, from poets any and everywhere.

The Missing Slate | Our generation hears about a very wholesome literary culture that existed in Pakistan in the 1970s, a culture that has apparently dwindled since. Apart for the National Library, we can’t think of a public institution [in Islamabad] with a wide selection of literature.

Ilona Yusuf | Well I have to say, I couldn’t find Zulfikar Ghose’s novels anywhere, and I met him when he came here and had a reading, and then I met him at somebody’s house also… he had a book of poems published by OUP and also a volume of essays, so I had those but I wanted to read in particular The Murder of Aziz Khan, which is now being republished by OUP. At that time it wasn’t available… couldn’t find it on the net either. I had gone to the National Library for research and I was taken upstairs where they had this huge, huge room where they have every book under the sun and they’re not even properly catalogued, very sadly. I found The Murder of Aziz Khan and it was June and there was load shedding and it was on the top story. [Laughs] There were no chairs, the stools were way at the end, and I found the book and I thought I have to read one chapter here, so I read that one chapter.

The Missing Slate | They take you to these huge empty rooms, with enormous tables, and that’s where you’re supposed to read.

Ilona Yusuf | And nobody seems to be reading! [Laughs]

The Missing Slate | The predictable retort when someone laments the absence of a book culture in Pakistan is that people here don’t like to read and are not interested in going to libraries. On the other hand, when you see events like the Karachi Literature Festival, Lahore Literature Festival and now the Islamabad Literature Festival… they’re completely packed.

Ilona Yusuf | First of all, in itself reading outside of your textbooks is not encouraged. When we had the reading for Vallum, I hate to have to say this but if I say it maybe it will make a difference… we had a reading at Kuch Khaas – I know some people consider it elitist, so I made a point of sending personal invitations to as many educational institutes as I could. I don’t think anybody came. I think [there were] only two people from NUML (National University of Modern Languages). That really disheartened me, because the only way you can make people appreciate poetry or listen to poetry is when you take it into the schools and colleges – that’s when things start. Because young people, when they read and they appreciate the sounds and the music of words, improve their writing skills; plus they develop an appreciation of literature. And I think those things help budding writers to write better…and  it also contributes to tolerance, in general, which we don’t have.

“During the month of Bhadro, the moon is totally eclipsed in the evening. The darkness of that night can only be compared to a blind inferno.” Story of the Week (February 21 – Language Martyrs’ Day), by Anwar Shahadat. Translated from Bengali by Masrufa Ayesha Nusrat.