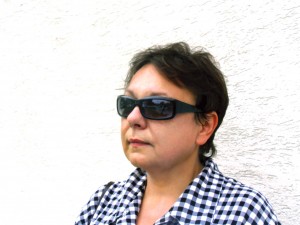 ‘Samko Tále’s Cemetery Book’ is an extraordinary novel: simultaneously disturbing and playful, it has been compared to works by Faulkner, Salinger and Günter Grass, as well as Forrest Gump. In our February Author of the Month interview, Daniela Kapitáňová discusses how Samko might have changed in the two decades since Slovak independence, talks about the ability of certain authors to shape a nation, and reveals the novels of Agatha Christie and Arthur Conan Doyle are her go-to books ‘whenever I feel low’.

Samko Tále’s Cemetery Book is set in the years directly after the ‘Velvet Divorce’ between Slovakia and the Czech Republic, but the world Samko thrives in has been shaped by the Communist Era. How do you think Samko would get on in today’s Slovakia? What has changed in the two decades since independence?

Thank you for this question, I find it very stimulating. How might Samko have changed? Well, actually, I don’t think he would have changed at all — he would find some new authority he could snitch to. His immense longing for recognition and equally immense longing for a world with clear-cut rules would find someone. Most probably it would be some tabloid hack because these are the kind of people present-day Samkos see as the “High-Ups”, rather than politicians.

For Magdalena Mullek, Samko Tále “recalls William Faulkner’s The Sound and the Fury“; the introduction to Garnett Press’ English edition of the novel compares Samko to Oskar Matzerath and Holden Caulfield; Michael Stein has described Samko as “Forrest Gump’s evil twin.” The breadth of those analogies suggests to me that Samko is a truly original creation, but does he have any influential predecessors in film or literature? Were you aware of the texts mentioned above while you were writing Samko Tále’s Cemetery Book?

Certainly not in a conscious way. But I can’t really see into my subconscious, so who knows…

I’m interested in your switch to a very innovative form of detective fiction in your more recent novels. In Samko Tále’s Cemetery Book, Samko mentions that “Grandmummy used to read German detective stories… The stories were called Allan Wilton.” Were those stories, and the stories of Raymond Chandler and Agatha Christie (Marlowe, Poirot and Miss Marple all appear in Murder in Slopná), part of your own childhood? Do you feel that the dividing line some critics draw between detective fiction and “literary fiction” is artificial?

As a child I was completely unaware of the existence of fairy tales and, as an adolescent, of “girlie” romances. Instead I only read crime stories and to this day, whenever I feel low I go back to Conan Doyle and Agatha Christie — here comes that longing for a world with clear-cut rules again…

As for the artificial dividing line: like it or not, a crime story follows completely different rules than  a novel. The more closely you follow them in the former the better you are, whereas in novels it’s the other way round. A good crime story has to be schematic to some extent. A good novel must not be schematic. So, in this respect, the dividing line is justified.

Samko Tále’s Cemetery Book is one of very few Slovak novels to have been translated into English this millennium. In fact, aside from Samko, only Peter Pišťanek’s Rivers of Babylon novels and Pavel Vilikovský’s selected prose have appeared in English translation since 2000. Which Slovak writers do you think deserve a wider audience?

In Slovakia we have a treasure called Tomáš Janovic. He is an aphorist, who is capable of expressing such profound truths in a couple of sentences that it makes you wonder what the point of a storyline and plot is. Let me give you an example: “If only they stole while creating something lasting. But they steal while stealing.” And we can also boast a slightly younger treasure, the novelist Pavol Rankov — the profound points he makes in some of his short stories are breathtaking. He’s definitely worth reading.

Alf Névery, the poet, is one of my favourite characters in Samko’s Cemetery Book. Samko sees him as “really weird in all sorts of ways because he didn’t have a job and never did anything”, which I suspect is a rather common perception of writers. You’ve previously mentioned ‘art produced by specific individuals… shap[ing] the cultural awareness of a nation.’ How necessary are writers? In what ways can writing shape a nation’s cultural awareness?

I believe in a kind of historical justice in (but not only in) literature: an author may exercise the public opinion of the day but that doesn’t mean he or she has actually shaped anything. All the moralizing tabloid writing, whether presented in the guise of ideology or popular entertainment, ultimately dissipates and only authors who have a vision can create something of real value. However, it is only in retrospect that we can tell who these are. As for the present, all we can see is who has managed to make a mark in public opinion and to what extent. We are not the ones who ultimately decide whether an author will shape the cultural awareness of a nation. Which is fortunate.

Our sincere thanks to Julia Sherwood for translating The Missing Slate’s questions into Slovak and Daniela Kapitáňová’s responses into English.

“…Like a prayer, I name/ all the things I did not ask for.” Weekend Poem, by Arlyn LaBelle.

Senior film critic Tom Nixon writes on why Kelly Reichardt's Meek's Cutoff remains one of the best films of the...