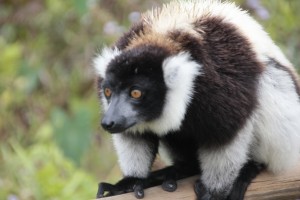 We head to Madagascar in this week’s Globetrotter

“Our rivers are red now. Our land used to be green, covered in trees, but they have all been burned down and when it rains the soil runs into the rivers and out to the sea,” our guide says.

Madagascar. The Red Island. Red rivers, red land, red houses and red flames. It is the fourth largest island in the world, torn from the side of Africa when Gondwanaland was broken into pieces as the earth’s crust cracked and the oceans rushed in to keep the two forever separate.

Our guide is a young man who mourns for the lost green hills of the country he loves. He works to preserve a little of his heritage. We stand on a hill overlooking the rusty river, which meanders through the valley. Across the river stretch fields as far as I can see. There is a slight green bristle on the rust fields now that the rainy season has started. This is deforested land, prey to erosion. Deep, bloody scars in the hillsides show where rain will cut further into the earth and carry away the rich soil that crops need to grow.

In Madagascar, magic is everywhere. Witchcraft is part of daily life, and fady – sacred prohibitions – are rife.
I am here on a reserve where endangered plants and animals find refuge.  I have come to see lemurs. These curious, intelligent creatures are one of this country’s treasures. But many species are already extinct, largely due to the destruction of their habitat.

The lemurs at the reserve have been rescued from captivity as pets. They are appealing primates, not found anywhere on Earth except on the island of Madagascar. With their big round eyes, pointed noses, whiskered ears and long curling tails they are as adorable as kittens or stuffed toys. It is no surprise that baby lemurs are often taken as pets, even though it is illegal to catch or kill them.

In Madagascar, magic is everywhere. Witchcraft is part of daily life, and fady – sacred prohibitions – are rife. Many tribes have a fady against eating or killing lemurs. However, each tribe has its own fady and so, lemurs are still at risk from hunting.

Despite their popularity as pets, lemurs are wild animals. Pet lemurs often react against captivity as they mature by quite literally biting the hands that feed them.  Too habituated to humans to be released into the wild, they are given a home here.

In this reserve they have a job to do; there are no scroungers or free riders here! Everyone is put to work going about their daily business of living and breeding – and educating tourists.

The other tourists and I have paid our fees. We eat in the café and buy fridge magnets, fluffy toys, and other useless items from the shop. The money we spend pays for the staff. The staff runs education programmes for schoolchildren who come to learn about their land and how to protect and cherish it. It seems that everyone benefits.  The lemurs have a better life here than they had caged or tied to posts. They can even escape if they want to.

On one side of the reserve there is the red river that our young guide bemoans. Lemurs do not like to swim, although they can if necessary – like cats. Anyone who has ever tried to bathe a cat will know that reluctance, but pink granite boulders provide a land bridge if the lemurs desire to go further afield.

I look over the river at the dry, red land. I can see why they don’t cross to freedom. Why should they flee to land so denuded of nourishment?

We have driven along roads through the forest and we have seen the land burning. The smell pervades the air and smoke rises across the hills. Sacks of charcoal sit for sale by the roadside. It is the only source of fuel for many of the locals. Most burning trees are eucalyptus, introduced to prevent soil erosion. Blackened patches stain the hillsides, but some scorched stumps burst into growth. In Australia, their home, fire is commonplace. Eucalyptus grows anew from its roots.

Slash and Burn, or swidden agriculture, has been the way of life here for centuries. Tava rice, more nutritious than paddy rice, is planted in the cleared ground. It can be grown for a few years before the soil is impoverished. Traditionally, people would plant tava rice and then move on. The land renewed itself and the process was repeated about every fifteen years. Now it’s illegal. The population is too large for long fallow periods. Without trees, the soil erodes and the forests that the lemurs depend on have begun to vanish.

Humans have come to believe they can conquer the land. Perhaps we can, for a limited time. But unlike humans, territories for lemurs and other animals are not about ownership. They represent the amount of land required to provide the amount of food they need to survive.  It is a simple equation: a specific amount of land provides a specific amount of food and a specific number of animals can live on it. If the numbers get too large, the animals will go off to find more territory or their numbers will fall.  In the reserve, lemurs are fed four times a day. The animals in this place do not have to worry about the red-scarred earth beyond the river.

As the forests burn, so do unique plant species, many with medicinal uses. I am examining a yellow flowered shrub called Coral Euphorbia when there is a rustle in the leaves of a tree overhanging the track. I look up. There sits a female Coquereli’s Sifaka.  She is mainly white with chocolate brown thighs, arms and chest. Her vivid yellow eyes contrast sharply with her bare black face that is surrounded by thick white fur. She is striking to look at.

These pretty lemurs are known as Dancing Lemurs because when they travel along the ground, which is not that often, they appear to dance in a curious sideways jumping motion. In the tree above me is a mother with her clinging baby. She has perched herself on the branch and is taking bunches of leaves in her small hand-like paws, carefully inspecting them, sniffing them, tasting them and then delicately nibbling away once she has discerned that they are a suitable repast, a veritable gourmet. All we can see of her baby is a small bundle and an occasional glimpse of a face as he peeps around his mother’s body. It is too small to be off on its own.

A larger, male Sifaka joins her. Does he feel the need to protect her or is he simply curious about what she is eating? Has she found a particularly good source of food? He is less relaxed about our presence but soon decides that we are not a threat. He settles down to eat on a branch over our heads. He peers down from time to time, yellow eyes darting about quickly to take everything in. We are in no doubt under careful observation. Then suddenly, he jumps down on to the path and proceeds to skip along the ground through our group. He is dancing! We are seeing, at very close quarters, the dancing lemur.

I feel privileged that these delightful animals feel safe enough to do this.  But listening to the guide talk about his country I wonder what the future is for its people and the lemurs of this red land.

Sandra Walmsley is pursuing an MA in Creative Writing on Place and the Environment at Royal Holloway and developing the skills to share her passion for travel and wildlife.