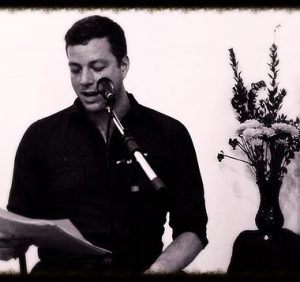 Eliot Hudson is an author and singer songwriter. He’s earned two master’s degrees at the University of Edinburgh (Literature in Modernity; Creative Writing). His poems have been published in the collection ‘Garlic and Sapphire’, and in the online poetry journal, Cleaves. Hudson also writes songs and performs under the stage name Hudson Underground throughout New York City. In the latest installment of our Author of the Month series, he talks to Casey Harding about the connection between music and writing, how learning to drum taught him how to read, and about the beauty of the surreal.

‘Dia de los Muertos’ is a beautiful, evocative story. Where did the idea for this quick piece come from?

‘Dia de los Muertos’ is a piece of flash fiction inspired by my experiences living across the river from New York City. I live two blocks from the Hudson River and often walk the shoreline at night. One night I saw an old man and what appeared to be his grandson putting little boats with candles onto the water. I overheard them speaking in Spanish about the boy’s parents and the boy seemed upset. I began writing this piece right there. The themes surrounding this scene resonated with many of my personal writing motifs and interests, especially music, death, and the medieval allegory of the Danse Macabre.

I find writing and music to be intrinsically linked and often inform one-another. There’s a reason why Homer’s Iliad and Odyssey were told orally, accompanied by a lyre, and guided by the structure of verses and rhythm, that the Quran literally means “the recitation” (and often in a poetic lilt), and that Shakespeare’s iambic pentameter is so pleasing to the ear. These qualities have become enculturated in the fabric of writing. For me, the main difference is how I practice these two mediums. I prefer to write in the winter and develop music in the summer. But beyond that, (as Derrida explains) writing is intended for someone who is not there, and thus it will exist when I am no longer here. Whereas music, is very much of that moment, while I am present, alive, in a room sharing a common experience, the pulse of life that we tap our toes to.

As a follow up, what is the difference for you between writing poetry and fiction? Do you feel that some ideas lend themselves more to one or the other?

For me there is less a difference between poetry and song, and there is a greater difference when it comes to fiction. The main difference being the narrative thread. Of course poetry and song can (and do) develop a narrative, however they’re more image and sensorially driven, often times (for me) developing from a stray line or sentiment churning within my head or soul. Fiction often begins or ends with one such line or sentiment, but often leads one to such a conclusion rather than allowing the entirety of the piece to indulge in such a feeling.

I find writing and music to be intrinsically linked and often inform one-another. There’s a reason Homer’s Iliad and Odyssey were told orally, accompanied by a lyre, and guided by the structure of verses and rhythm, that the Quran literally means “the recitation” (and often in a poetic lilt), and that Shakespeare’s iambic pentameter is so pleasing to the ear.

Are there any authors who have directly influenced you?

The first book I ever read was Alice in Wonderland, and the surreal has taken captive of my imagination ever since, especially Mikhail Bulgakov, Italo Calvino, and Gabriel Garcia Marquez. I enjoy the textured and baroque language of Salmon Rushdie, and the seemingly simple yet vivid turns of phrase of J.M. Barrie and Robert Louis Stevenson. All the while, I find philosophy deeply enthralling and am enamored with the voice of Foucault and some of the more recent “philosophical” authors like David Foster Wallace. I love how the act of reading Infinite Jest, holding the book in your hands, and the physical performance of flipping to the 388 endnotes makes you appear as though you’re enacting the famous image of Hamlet examining the skull of Yorick (wherefrom the book derives its name). There’s something captivating about looking into pages of black and white like the shadows of Yorick’s skull, studying the bones and thoughts of a man “so full of infinite jest,” reading the thoughts of a deadman, in a performance we all continue.

I also studied drumming very extensively as a child and, as a writer, there are things that I learned as a drummer that have impacted my writing, specifically the almost zen like state that rudiment practice produced as well as the structure and organization that percussion gives a song. In what way has drumming affected your writing (either style or ritual)?

As a child, I learned to drum from the legendary Jazz drummer Johnny Blowers, and due to severe learning difficulties, I learned how to drum before I could read. My inability to read until the third grade deeply troubled my mother—a Middle School English teacher. The rhythm of drumming aided how I came to read; through poetry. I began with poetry, because the line breaks made the words more accessible for me, and because the rhythm, repetition, and rhyme helped me hear and visualize the words, to put them together in sentences as one might a drum cadence. Thus I greatly credit music for not only allowing me to understand words, but also how they connect and relate to one another.

"We swivel our heads around until a diamond cuts through the waves. A diamond made up of dusky dolphins with...