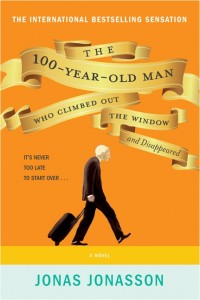 When I was little, my grandfather used to send me to the liquor store for a curious bottle of clear liquid. The shop lady was kind to me and always made jokes about how I was my grandfather’s favorite. I never understood why, but was pleased by the compliment all the same. I watched my grandfather remove the seal and twist off the cap, then pour the clear liquid into two china teacups. One for himself, one for his friend. They cheered and emptied the cup in one gulp. After the motions were repeated a few more times, the living room was filled with exuberant chatter. I cherish this memory of my grandfather, the solemn and taciturn man who rarely let loose, but in these few moments allowed himself to laugh silly and declare his boundless love to my grandmother. With this memory, I read Jonas Jonasson’s debut novel which made me laugh until my temples ached and filled me with awe and admiration just as my grandfather did.

Like my grandfather, Allan Karlsson, the protagonist of Jonasson’s novel, also appreciates strong liquor and prefers to make important decisions after a few drinks. The story alternates between Karlsson’s life as a young man, and as a 100-year-old who climbed out the window of an old folks’ home and disappeared. Allan’s encounter with a mysterious suitcase and his impulsive decision to steal it set off a chain of events that involve motorcycle-gang criminals, a lonely inspector, the most educated man in Sweden, an elephant, and too many bottles of vodka. Allan’s adventure, as opposed to a quiet death, is not so hard to believe once his past is revealed. As the man in possession of an enormous scientific discovery, from the isolated room of a mental hospital to Russia, China, Korea, Allan met one prominent leader after another including Winston Churchill, Stalin, Mao Tse-tung, and Kim Il Sung, among many others.

Following the life of Allan Karlsson is like learning history from the people who were actually there. His journey, though a long one, never felt arduous but always easy and spontaneous. Through it all, he made decisions that may seem immoral according to the standard moral compass, yet his very disregard for social laws and ethics reminds us to be authentic to ourselves. Not once in his life did Allan do something he did not want to. Though his choices may have led to life-threatening situations, he was the one in charge of his own destiny. Perhaps to Allan, life itself is not threatened by danger, but rather by our own resignation to stop living.

Though a fascinating and memorable character, Allan is not the only one who made the adventure so enjoyable. Jonasson’s cast of characters are like a bundle of black sheep, misunderstood by the world until they were thrown together. Being one in his own right an oddity, they complimented and enhanced each other’s qualities, and left the reader with a sense of the absurd, yet gentle, human, and ultimately comforted by the notion that we are not so alone−there are others like us, we only need to find them.

Abbigail N. Rosewood is an editorial assistant at The Missing Slate. She describes herself as a vagabond at heart, a traveler and a couch potato, a library “frequenter,” a believer of God and an agnostic. Abbi studies Creative Writing at Southern Oregon University and her work has appeared in a number of magazines, including Blazevox, Pens on Fire, The Bad Version and Greenhills Literary Lantern.

“Let’s transform the self-defensive stance of ‘I’m not racist’ into a widespread, activated stance of ‘I’m committed to undoing racism in myself and in my culture.'” Bethany Webster discusses racism and the feminine.

Gatsby Through The Ages

Sana Hussain writes about the evolution of The Great Gatsby in cinema, ahead of the Baz Luhrmann release later this...