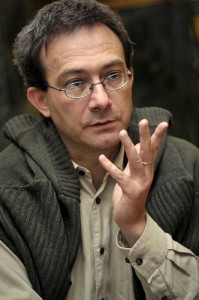 Szilárd Borbély’s new book The Dispossessed: Has the Meshiyah Left Yet? explores the world of extreme poverty and deprivation experienced in a tiny Hungarian village, close to the Romanian and Ukrainian borders, in the mid-1960s.  It is narrated by a small boy who records his family life, and the lives of the villagers, with a clarity and an “unknowing knowingness” that shocks in its determination not to look away from the brutality, the cruelty and bestiality that for the most part determines their lives.

Within the Hungarian literary and cultural context, for reasons that are too detailed to outline in depth here, this is already a deeply radical gesture. Suffice it to say that the lives of the poor in Hungary—the desperately, the eternally poor, the people mired in what American sociologists like to call the culture of “deep poverty”—have never really been rendered like this, in such seemingly simple, yet utterly devastating prose.

The situation of the boy’s family is even much more desperate—due to the father’s presumed Jewish heritage, the family is relentlessly ostracized.  For all intents and purposes, they are the Untouchables of the village.  (Officially, they belong to the Greek Catholic Church, in a predominantly Calvinist setting, creating yet another layer of marginalization, even in a society where religion was officially absent.)  The father is clearly far too traumatized to discuss this matter—and nothing is ever discussed openly in this milieu.  (Later on, he is actually forced to flee the village and can only visit his family in secret.  The little boy actually doesn’t mind, because he is usually drunk and often violent).  Even the word itself, “Jew,” fills the little boy with terror.  (“The Jew can never be seen.  The Jew is just a word.  He’s always there, because they are always talking about him, but he is invisible.”) At the same time, the mother continues to exhort the children to not forget that they are Jewish, and in one of the most deeply haunting scenes of the book, she lights candles on the Sabbath and instructs the children to look out of the window “to see if the Messiah is coming,” an enactment of the family’s enigmatic Jewish roots necessarily performed in secrecy and in the absence of the father.  The brilliant portrayal of the trauma of all of these overlapping and often conflicting identities brings to mind the words of the Czech folksinger Jaromír Nohavica:  “Only the unmarked will be saved.”  Throughout the narrative, the little boy seeks consolation in the idea of prime numbers, “which can only be divided by themselves.  And by one.”

The Meshiyah, referred to in the book’s subtitle, is the name of the vaguely Christ-like figure mockingly called “Meshiyah” (a distortion of Messiah), a Roma man (in a village where every dog is named “Gypsy”), who is doubly scorned as both a Roma and a “tota” (i.e., as a “Slovak,” because he was born with a speech impediment).  Never dressed in anything but the villagers’ cast-out clothing, his task in the village is to remove the excrement from the villagers’ outhouses.  When they need their outhouses cleaned, they come to the village pub and call out, “Has the Meshiyah left yet?” As in Borbély’s ground-breaking collection of verse, Death Magnificent (Halotti pompa, Kalligram, 2006), there are no distinct delineations between the Christian and Jewish Messiahs: both equally haunt the life of the village as cast-off, despised presences, or as presences that can only be evoked in secrecy.

Scenes from daily life are rendered in the eternal present tense belonging to myth and legend.  Moreover, the villagers speak their own dialect, confined exclusively to the village itself.  Yet, though the schoolteacher from the city tries to beat the non-standard Hungarian words out of the children, it becomes clear that some of these linguistic deviations are undeniably eloquent.  The examination of language and its automatic internalization by the children within the microcosm of the village is one of the most important contributions of this work, bringing to mind, for example, such works as Viktor Klemperer’s Lingua Tertia Imperia.

The Dispossessed is not exactly fiction, nor is it autobiography. Borbély stated in an interview that his father once asked him not to write about their life in the village where he spent his boyhood years—a promise that Borbély kept until after his father’s death in 2006.  Then, he states, he felt the need to work with the material contained in the present volume.  “I write about poverty because there is nothing more tedious than poverty,” he has said in a recent interview, “and because I see a continual disintegration in terms of how poor people are treated, whether they are Roma or Hungarians.  And because today I would hardly be able to get out of that milieu that I came from.  This gnaws away at my heart, it is deeply upsetting to me.”

One of The Dispossessed’s Hungarian reviewers, Ákos Győrffy, put it this way:  “We live in an agonizing society. Slowly but surely, we will be able to state that a third of the country’s inhabitants are as dispossessed as the dispossessed in this novel.  This is a huge problem: it will be an even bigger problem.  I fear that we have already passed the point of no return.”

Ottilie Mulzet’s English translations of Borbély’s ‘curious and terrifying’ poems have been published by The American Reader.

A letter to Ewa Lipska