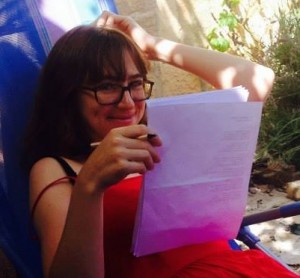 Annie McDermott’s translations from Spanish and Portuguese have appeared in magazines including Granta, World Literature Today, Asymptote, and The Missing Slate. In 2013, she was the runner-up in the Harvill Secker Young Translators’ Prize, and in 2014 she was a translator-in-residence at the Crossing Border music and literature festival in The Hague. In this exchange of e-mails with The Missing Slate‘s Articles Editor, Constance A. Dunn, Annie discusses the limitations of using a computer to translate fiction, the rhythm and beauty of Marcelino Freire’s writing, and the power of translation.

Annie, you translate from Spanish and Brazilian Portuguese into English. What do each of these languages offer that is lost when translated into another?

The very fact that things can’t be carried perfectly intact from one language into another means that you have to find creative ways of replacing whatever didn’t make it – and this often makes the language of translated fiction particularly exciting.

A great example of this (though nothing to do with Spanish or Portuguese) is the work of Sarah Ardizzone, who worked with young people on the Tulse Hill estate in Brixton to find an English into which she could translate the French urban-slang-packed Golem series of children’s books. It’s less that the slang from the original was ‘lost’ during the translation process, and more that English had to be stretched into exciting new shapes to accommodate it.

I think this is changing, yes, and I think that’s at least in part thanks to all the great new – and newish – publishers around who are committed to making literature in translation more widely available.

There’s another aspect to it as well, though, which relates to the idea some people have that writing in translation has somehow been corrupted or diluted for having passed through a translator. But I’m convinced that the more brilliant translations people read, the more they’ll see that translators are writers in their own right, and that a translated book can knock you off your feet with just as much force as any original.

Marcelino Freire’s writing challenges cultural stereotypes. Is that what attracted you? Or was it something else? Do you agree with his portrayal of Totonha, or the man who talks about Yamami?

I began reading Marcelino Freire because of his links to one of the most vibrant, exciting and genuinely important literary scenes I’ve ever encountered: the network of ‘saraus’, which can only very inadequately be described as poetry readings, that take place around the outskirts of São Paulo. These events, which combine literature, rap, music and social activism, form the backbone of what’s sometimes referred to in Brazil as ‘marginal literature’ – literature written by and for people whose voices aren’t often heard in the country’s literary mainstream.

Freire now occupies an interesting and fairly unique position in between this ‘marginal literature’ and the literary establishment, but his writing is as uncompromising and alive as ever – which is why I was so keen translate it.

As for whether I agree with his portrayal of Totonha or the protagonist of ‘Yamami’ – I wouldn’t know where to begin answering that. I’ve never met a sex tourist, for example, so I can’t speak for whether ‘Yamami’ is an accurate portrayal of one or not. What I can say, however, is that it while I was reading it I believed that that was precisely what that particular sex tourist was like, and my job as a translator was to (attempt to) give readers reading in English the same feeling.

What do you hope readers get from your translation of work like Freire’s? In other words, what’s more important: the rhythm and beauty of the words, or the message?

Part of what makes Freire’s stories are so powerful is the voices of the people who tell them. When you listen to someone speak (and Freire’s work is written to be read aloud), it’s almost impossible to separate what they say from how they say it.

I don’t think translation should involve separating them either. I’m very suspicious of this idea that you can either be faithful to the sound or the meaning when translating – if you want to be faithful to the experience of actually reading the story, of listening to the storyteller’s voice, you need both to be working together.

Recently, I’ve stumbled across some beta programs that provide advanced translation without using a person. Do you ever worry that you’ll be replaced by a machine? What would be lost if a machine were to take over?

I would be fascinated (though also quite inconvenienced) by a machine that could translate literature! Writing fiction, in so far as it involves convincingly impersonating humans, could almost be a module of the Turing test, and any computer that could do it would have reached a pretty interesting level of ‘intelligence’.

There are certainly aspects of translating that I think I’d find easier if I were a machine able to process everything the internet knows about language. When I’m not sure of the register or connotations of a word, for example, I might skim through Google results to see how and when it’s used. I sometimes wonder what kind of understanding I’d have if I could skim through every single use of it a search engine could find.

However, even though intricate programming backed up by access to big data can get you pretty far, the rigorous logic of a computer can still be tripped up by an unpredictable situation – which is why Google is currently trying to programme common sense into machines, and why humans can perplex computers in chess games by making illogical moves. Writing literature isn’t a million miles away from using language to make a series of illogical, unpredictable moves, and so I think it might trip translation programmes up for a little while yet.

What is your favourite untranslatable phrase?

I have a huge weakness for slang that, while not necessarily untranslatable, sounds completely nonsensical when translated literally. I love how in Brazil, for example, you might say that a great party was ‘very legal’ (muito legal), or how in Mexico it might have been ‘really dad’ (padrísimo), or even ‘with mother’ (con madre).

"This Thanksgiving, I will sit down to turkey with all the trimmings and stuff my face, celebrating as any Native...